July 14, Le Quatorze Julliet, marks the French holiday we know as Bastille Day. Not surprisingly, the origins of this holiday are un peu compliqué. Two key events in the French Revolution share this date.

The first: In 1789, the people of Paris, fearful that their representatives would be attacked by the royal military of Louis XVI and desiring ammunition and gunpowder for a possible battle, stormed the Bastille, a prison in Paris that held citizens under not so just cause and without rights to appeal. Often, prisoners were held there because of anti-royal writings.

One year later, on July 14, 1790, there was a huge feast to celebrate the conclusion, or so they thought at the time, of the French Revolution. Apparently the feast lasted 4 days and concluded with fireworks, fine wine, and running naked through the streets.

While we didn’t run naked anywhere, we did celebrate the holiday. We kicked it off with a pétanque tournament; I was partnered with a lovely Englishwoman named June and while we held our own, we were eliminated early in the tournament. It’s quite possible that my problem was I didn’t have a cool straw hat like most of the experienced players. No big deal, I was hungry and I forgot how long those games last! The French-American Chamber of Commerce sponsored a barbeque, concert, and pick-up soccer and volleyball games, so we had plenty of time to eat and play with San Diego’s French and Francophile community. It was a perfect southern California day: sunny, a cool ocean breeze, bright blue skies.

Here are some photos from the Bastille Day Military Parade a few years ago. It proceeds down the Champs Elysees and lasts for hours. The year we were there, Sarkozy was president. As he rode through, the crowd around us started whistling and my first thought was: they really like their president. Then I realized my mother-in-law was shaking her head and shocked, astonished, that people would dare whistle like that. Turns out whistling in France is quite rude; basically the equivalent of booing. So probably best not to whistle at a French girl.

If you ever go to the parade, get there early, bring lots of water, a snack, definitely a camera, and don’t bother to try and claim any territory like you would in a parade here – you’ll be scrunched and pushed out of the way.

Here’s my Bastille Day workout, designed to help you stand your ground in the crowd of parade revelers:

1. Medicine Ball Squats: Take a wide stance and squat down, maintaining even weight on each foot, while thrusting the medicine ball straight out in front of you, arms parallel to the ground. This will help you keep your position and should you need to, shove back.

2. Lateral Deltoid Raises While Balancing on One Foot: To help you ward off those pushers that come at you from the side while maintaining your balance. You can’t risk falling at the parade, they’ll never let you stand back up.

3. Lunges with Biceps Curls: It’s hot. Really freaking hot in Paris in July. If you are American, and as such a Water Bottle Addict, you’ll be lifting that water bottle to your mouth for at least three hours straight. The lunges are to help propel yourself forward with force after you’ve been shoved and maneuvered to the back of the pack.

Me, tired from getting up early, waiting for the parade. We started out in front then got shoved to the back before the parade even began. 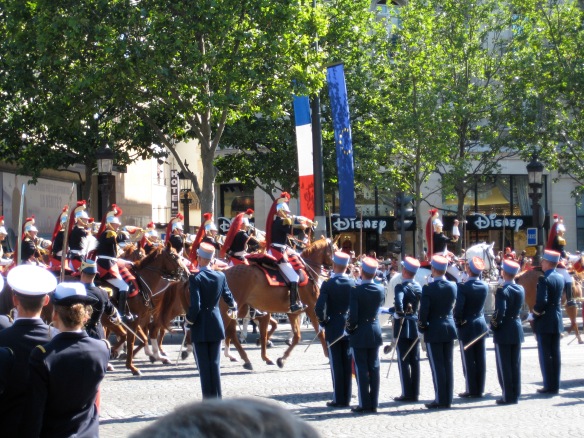 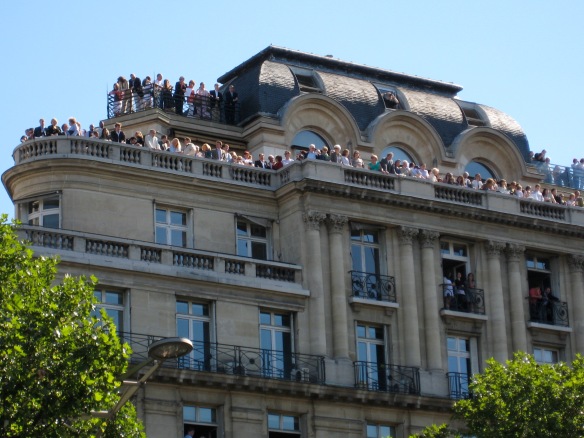 Best seats on the Champs. They were drinking champagne.

The firemen, the most popular group in the parade 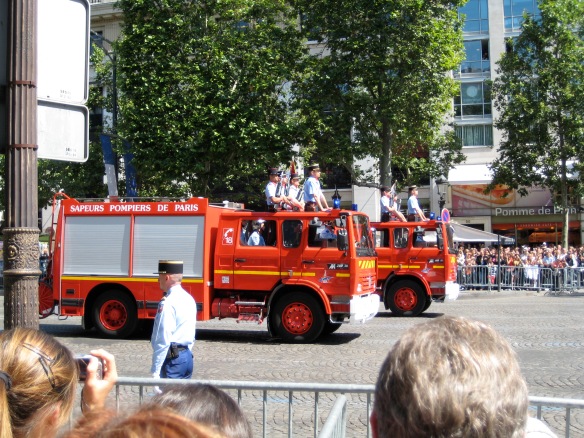