Turns out my French is better than I give myself credit for, at least according to the Alliance Française and the test I took there!

The exam was two sections: the first on computer, which started with very basic French and quickly progressed to complicated phrases and vocabulary. In one of the sections I had to answer questions on women’s hairstyles depicted in basic drawings. I wouldn’t know what those styles were called in English, so I’m pretty sure I bombed the French part! Points were awarded for correct answers and removed for incorrect answers. Intimidating.

Here are my results: 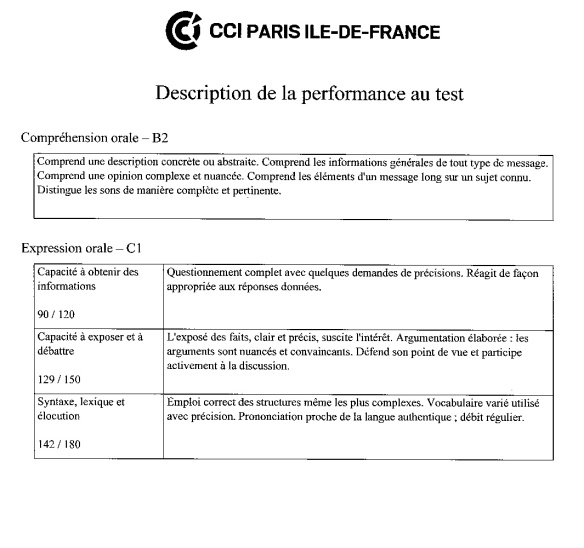 Here’s how those levels are defined, according to the Wiki article on the CEFR (Common European Framework) for determining language levels:

B2 is Upper Intermediate:

·Can understand the main ideas of complex text on both concrete and abstract topics, including technical discussions in his/her field of specialisation.

·Can interact with a degree of fluency and spontaneity that makes regular interaction with native speakers quite possible without strain for either party.

·Can produce clear, detailed text on a wide range of subjects and explain a viewpoint on a topical issue giving the advantages and disadvantages of

·Can understand a wide range of demanding, longer texts, and recognise implicit meaning.

·Can express ideas fluently and spontaneously without much obvious searching for expressions.

·Can use language flexibly and effectively for social, academic and professional purposes.

While these results mean we can move forward with my nationality application, they also mean that I need to be less self-conscious in speaking French. I’m at a level where I’ve passed those first few huge hurdles of the learning curve, but I am very aware of the many things I haven’t yet mastered, so too often I tend to not speak rather than risk making mistakes. I want to be completely bilingual. To watch a movie without any need of subtitles. To understand song lyrics without help. To not make grammatical errors. To maybe, even, someday teach French. (I need a back up plan. Being a physical therapist is hard on your body!)

These results were just the encouragement I needed, as I’ve been doubting whether French is something I can ever hope to master. This reenergized me, and made me start dreaming again of spending a summer, or two, or three, in France, going to language classes, and of one day being so fluent that maybe I even fool a French person or two.

12 thoughts on “The Results Are In: My French Ain’t Half Bad!”