I went to my first Opera recently. We saw La Fille du Régiment (The Daughter of the Regiment). Originally set during the Napoleonic Wars, it tells the story of a regiment of soldiers who adopt a young girl who then grows up among their ranks. The San Diego Opera moved the story to World War II, so the idea that a girl would spend so many years with a group of soldiers doesn’t really fly, but as the review in the paper said: don’t think about it too much. I didn’t. Honestly, what I was thinking through most of the opera was this: I’m so flipping bored. I wonder what time Ghirardelli Chocolate closes?

I know, I know, it’s terrible. Horribly disrespectful. I can appreciate, on a technical level, what the performers accomplished. But I don’t enjoy the music. Nor did I love the story. It’s not that I don’t love a good musical or a star-crossed lovers story. This one just didn’t work for me.

Plus, I felt like I’d stepped into an alternative universe. One where a man backs his Maserati up at full speed with his nose in the air, not even bothering to glance at you because he knows you’ll get out of his oh-so-important way. Where big-breasted but otherwise skeletal young women wear five figure gowns and wobble ever-so-delicately on their sparkly heels, clinging to the arms of their white-haired husbands. Where people go to see and be seen; to have their photos taken for the society page of the newspaper.

“Where are we? Who are these people?” I kept asking my husband.

He was trying to figure out what the performers were saying while I tried to not look at his watch to see how much time had passed since the last time I looked at his watch.

“I can’t understand anything they’re saying. Their French is killing me,” he mumbled.

Instead I think I’ll stick to the kind of opera I love: Opera Café and Patisserie. Where they serve their namesake dessert: Opera, a layered almond sponge cake soaked in coffee syrup and layered with ganache and buttercream then covered in chocolate.

The café is located in a strip mall in Sorrento Valley; not exactly the kind of place you’d expect to find a gem of a restaurant like this. It’s my favorite place to meet my husband for lunch. The preceding conversation usually goes something like this:

“Hey, babe, can I come up and meet you for lunch?”

“Sure. Do you want to try a different restaurant this time?”

“What? No! Why would you even say that?”

And this (because no blog is complete without food photos): 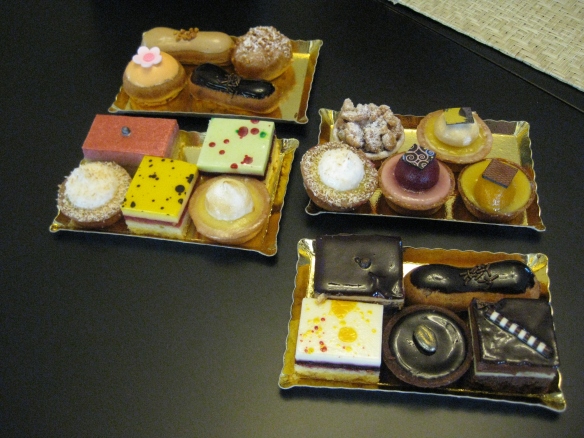 That’s an Opera where I can happily cheer, “Encore!”